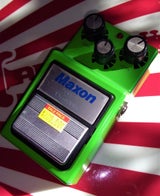 The Maxon OD-9 may look just like your old favorite, but that's where the similarities end. With improved circuitry, the OD-9 stands at the forefront of the Nine Series effects evolution.

The OD-9 uses a signal-distorting diode (Panasonic #MA150) that is located in the amplifier stage's negative feedback loop (this stage also contains the JRC4558 IC chip). Therefore, the OD-9 distorts signal in the amplifier section itself which yields a smoother, milder, more natural sounding distortion than a separate clipping stage. This is also the reason that the IC type used in the circuit has such a large impact on the unit's tone. Maxon developed this unique design more than 20 years ago, an industry first that is commonplace today.

The OD-9's new circuit uses different output resistors than its predecessor. After the unit's initial release it was discovered to have a high susceptibility to noise due to static electricity buildup. To improve performance, the values of the output resistors on the OD-9 were increased, but their positions kept the same as the original. This circuit change has no audible affect on the sound of the unit, save for reducing unwanted noise levels. In addition, the OD-9 features True Bypass Switching for natural, uncompromised tone in bypass.

Like the OD808, the OD-9 provides the natural, mild overdrive of a tube amp without sacrificing the guitar's original tone. It can also be used as a clean booster to provide increased gain from an amplifier.

Powered by either a 9-volt battery or an AC adapter